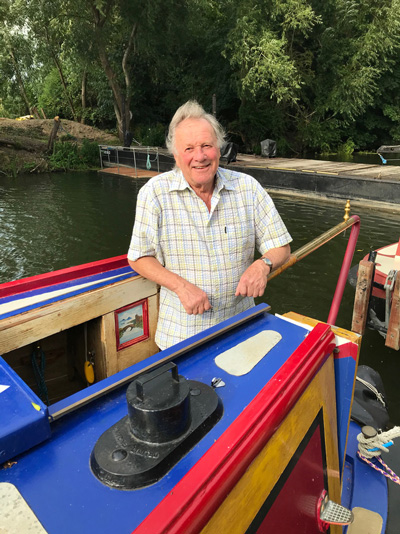 In late May 1990, a convoy of Dunkirk ‘Little Ships’ were planning to commemorate the 50th anniversary of the evacuations by crossing the Channel. Chris Coburn, whose father was a lieutenant commander in World War II, was keen to attend the commemorations. So, when two mates on the River Thames mentioned they were taking their boats across he didn’t think twice about joining them on his own craft, Progress.

A 71ft flat-bottomed narrowboat, Progress was, by Chris’s own admission, infinitely more suited to quiet canals than the world’s busiest shipping lane. But he was no stranger to coastal boating. After the war his father – who had operated a speedboat business on the south-coast – expanded into pleasure-steamers. Chris was roped in to help, and by the age of 21 he had qualified for his skipper’s ticket.

The Little Ships set off in force seven conditions but rather than risking it, Chris decided to shelter in Ramsgate harbour overnight and hope for more favourable weather in the morning. His patience paid off: “It dropped to a four and was forecast to fall off completely. So we decided to have a go and, if it got too bad, to drop into Dover.”

While this wasn’t the first time Progress had been on salt water (Chris had previously navigated the Severn Estuary), it was certainly the first time it had “bounced around on it”. Unbeknown to Chris, some of this water was entering the diesel through the fuel tank vent. The result was an unscheduled pause, slap bang in the centre of the Dover Strait, when the engine cut out. It was, rues Chris, “a fairly painful lesson.”

In deteriorating weather, they reached Calais nearly eight hours after their Ramsgate departure, making it to Dunkirk just in time to take part in the wreath-laying ceremony before tackling the return leg. “Absolutely no problem with that passage”, we’re pleased to relay.