Sculptor Ian Rank-Broadley tells us about his latest commission: three bronzes by City Road Basin on the Regent’s Canal in London 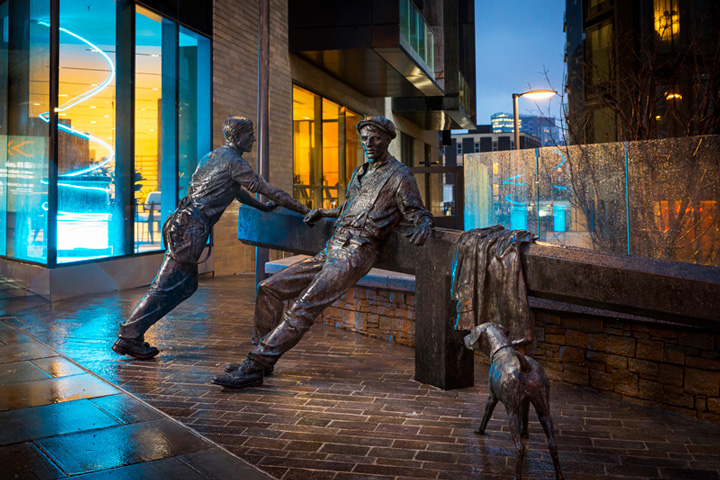 Even if you don’t recognise the name, it’s impossible not to be familiar with Ian Rank-Broadley’s work. His effigy of the Queen has appeared on all UK and Commonwealth coins since 1998. Switching his attention from the crown to the canal, his latest project is a three-part commission at London’s City Road Basin on the Regent’s Canal. The first installation, ‘Opening the Lock Gate’, was unveiled at the entrance to the central plaza in March, with two further bronzes planned for 2021 and 2023.

While this first sculpture shows two men in traditional working boater dress, his original clay maquette of the scene depicted something a little more controversial. “I thought it’d be great showing a bit of hot, sweaty ﬂesh,” laughs Ian. “Sadly the client thought that would be far too sexy. ‘No, no, no,’ they said, ‘You’ve got to put shirts on them or we’ll have all sorts of complaints.’ In fact, I don’t believe that’s the case. When people get very protective like that and worry others will get offended, I ﬁnd they rarely actually do.”

Aside from that, Ian’s deservedly proud of the scene now it’s in situ, which is scaled at a generous life-size. “If the guys actually stood up they’d be around 6ft 6in, which is slightly smaller than I would normally use for an outdoor sculpture (traditionally one-and-a-quarter life-size, because the light diminishes the scale),” he explains.

The timing of the sculpture is impeccable, landing as it does on the 200th anniversary of the Regent’s Canal’s opening. Although this seems to have been happy coincidence rather than deliberate forethought on the part of his client, Berkeley. “What I liked about the commission was the fact it’s commemorating a group of people who were hugely responsible for the country’s movement of goods and trade and who have largely been forgotten,” Ian reveals. “It was my intention, as sculptor, to portray these lives with dignity and create a lasting tribute.”