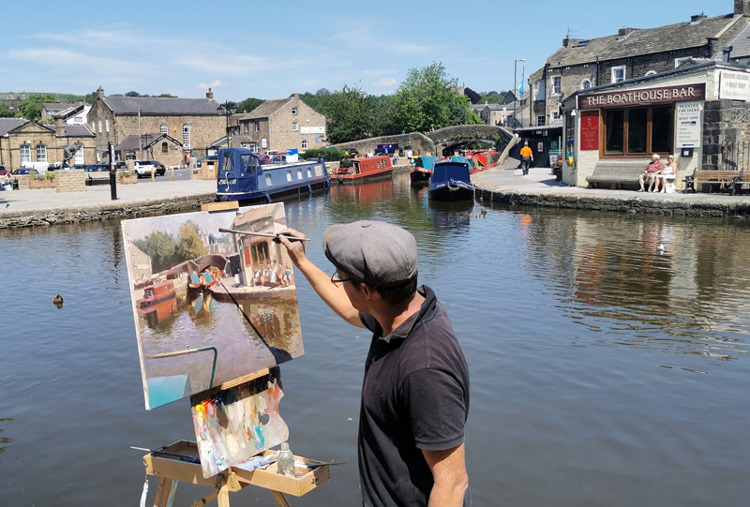 Professional artist Rob Pointon first came to the attention of WW in 2013, shortly after he completed a year-long painting tour of the network on his liveaboard narrowboat. In that same year he became the Canal & River Trust’s artist-in-residence, while a Crick Boat Show commission saw him carry out a fine oil painting of historic narrowboat President in steam at the quayside.

Rob has only been introduced to the inland waterways in 2011 during a trip to the Canal du Midi in France as part of an art course. In spite of having no boating experience, he and his partner Karen bought a 60ft sailaway and fitted it out for UK explorations. Five rivers and 17 canals later, Rob had produced an incredible 80 oil paintings.

After marrying in 2013, the couple sold their narrowboat in order to purchase their first home together but the lure of the waterways saw them invest in a share of a syndicate boat just four year later. With Rob spending time on the water again, it was inevitable that canal scenes would creep back into his work. “I think when I’m painting water it’s never a struggle, it always seems to be freeflowing,” he says. “It frees me up to be bold, expressive and gestural. But I also feel at home by the water.”

During lockdown he began setting up his easel on the towpath, and once travel was permitted, he headed up to the Leeds & Liverpool Canal at Skipton to paint the junction from three different perspectives.