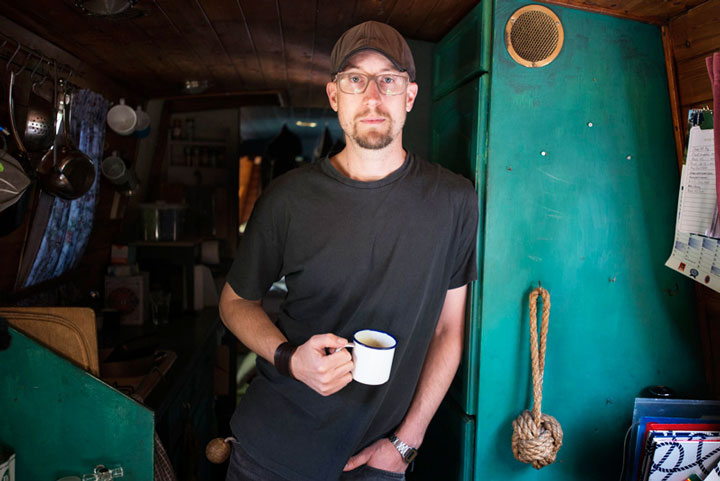 Robbie had been living aboard for over four years, having moved to London for work and been persuaded to borrow a friend’s narrowboat when in need of cheap accommodation. He was initially reluctant: “I assumed the lifestyle was just for hippies, and I thought ‘that’s not me’. As soon as I discovered the community of liveaboards in the capital, however, my interest was piqued and I just fell in love with it.”

It wasn’t until he reached Runcorn in 2016 that Robbie thought to document his travels online. He explains: “I was in the middle of nowhere, on my own, and really missing the liveaboard community I’d left behind in London. I wanted to meet people, and the internet offered that means of communication. That’s why I started making the YouTube videos, really – I wanted to reach out to people.”

While there’s a certain amount of wobbly camera-work at play in his vlogs, Robbie excels in providing gorgeous footage of canal cruising, which is spliced together over a pleasant acoustic soundtrack that he writes and records himself. It’s a winning formula – and one which seasoned canal show producer Stuart Woodman thought would make the jump from niche online content to mass-appeal telly fairly easily. He ﬁrst approached Robbie with the idea for an “experimental” TV show in October 2018, and the resulting series aired just over a year later.

Showing the real side of boating, the five 30-minute episodes follow Robbie on a 300-mile journey from Shardlow on the Trent & Mersey to central Liverpool – including all of the problems he has to deal with along the way, from running aground to oil leaks. “I just wanted to record the truest version of my trip and share the experience with viewers,” Robbie says. “I want them to feel like they’re on the journey with me.”

Following the success of the first series, BBC4 commissioned a second and filming is due to take place in 2020.