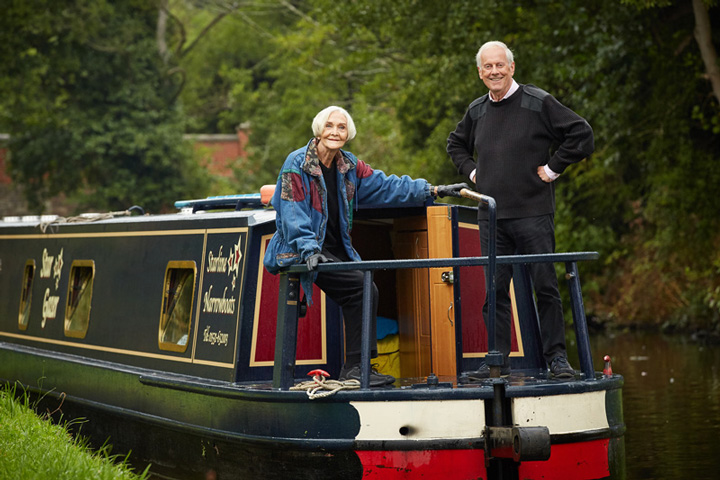 In the hands of the boating newcomers, the programme has necessarily taken a new direction – and has been something of a baptism of fire. “Apart from being an occasional passenger on the Isle of Wight ferry,” says Sheila, “I’ve done nothing on water. Never ever.” Gyles is even more categorical: “I’ve played with ducks in the bath but even as a child I didn’t have a toy boat. Water just wasn’t on my radar, and that continued through adulthood. Hiring a boat would never have occurred to me before.”

The producers certainly threw them in at the deep end. The first episode saw them tackling the non-tidal Thames, which included the bustling tourist hotspots of Henley and Windsor. It’s a waterway that can be daunting even for experienced boaters, but add a 70ft wide-beam into the equation, not a mid-length narrowboat, and the difficulty level is higher still. “It was absolutely ridiculous,” admits Sheila. “The boats we were given throughout the series were huge, and all slightly different, meaning I had to acclimatise to the steering and size afresh each time. But I love boating now and I’m getting quite good at it.”

For Gyles the challenge was overcoming an almost total absence of driving nous. “Even in a car I struggle. When I turn a corner or come to a roundabout I have to turn the radio down. I can’t do two things at once. So, at first I found canal navigation impossible. It’s all counter-intuitive – not just the direction you move the tiller but which side of the ‘road’ you have to keep to. It was all topsy-turvy to me.”

Having filmed four episodes, the pair are hoping that the producers give them the opportunity to work on a second series. “I’m up for anything now,” says Sheila. “If you’d previously asked if I’d consider a canal holiday in the Black Country I wouldn’t thought you were crazy. I’ve been proved wrong. It was one of the best things I’ve ever done in my life.”