Britain’s canals were at the heart of the Industrial Revolution – their construction made possible the movement of large quantities of raw materials that stoked Britain’s industrialisation and allowed for goods to be moved efficiently to market.

As rail, then roads took over the waterways role in transport, large parts of the canal network were infilled and built over but much remains as a highly valued leisure resource. We are also left with a rich legacy of inland waterway history and heritage, which you can explore on the NarrowBoat website. 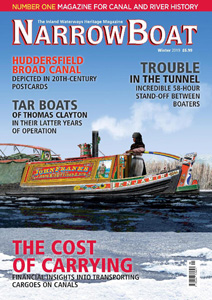 Originally conceived as a quarterly magazine to bring this legacy to life, the NarrowBoat website is now a fully searchable archive of over 400 articles (including more than 6,000 images) covering over 200 years from the birth of the canals to the 1960s.

See the NarrowBoat archive at www.narrowboatmagazine.com and discover for yourself the people, the companies, the boats and the places that have been part of the waterways in British history.