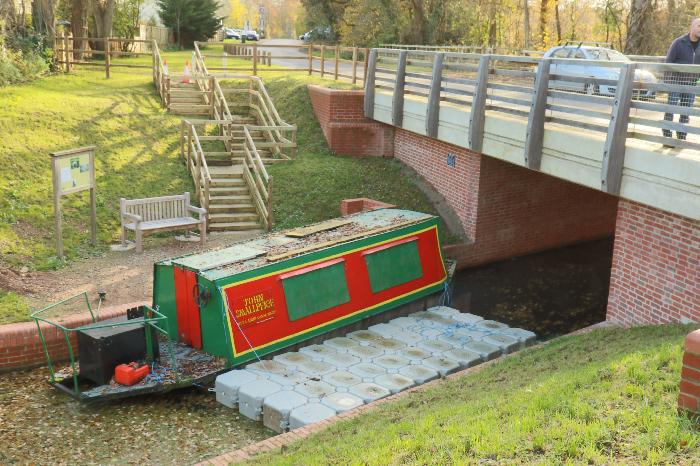 Despite the restrictions of 2021 it was a productive year for the Wey & Arun Canal Trust. The trust secured ownership of more sections of the canal route, submitted several planning applications for major projects and made good progress on current initiatives, bringing the ambition to restore London’s Lost Route to the Sea still closer. Once again public interest in the 23-mile canal in Surrey and Sussex grew, along with the number of visitors. Special and scheduled boat trips operated on the longest restored section at Loxwood under Covid-safety restrictions and a volunteer recruitment drive bolstered working party numbers.

North (Shalford/Bramley):
Major ambitions for the canal in Surrey were revealed in 2020 with a planning application that would re-establish the link with the national waterways system at Shalford, near Guildford. In 2021 the trust submitted further applications to restore the northern section of the canal. Close to the junction of the canal with the River Wey (Godalming Navigation) in the Hunt Nature Park (owned and managed by the trust), a new information centre and boardwalk officially opened in September 2021. The timber building will be a focal point for visitors and will host educational visits and guided walks.

South of Bramley the trust now owns about 1.8km of the canal route in the Birtley and Rooks Hill/Fanesbridge areas. This length approximately doubled during 2021, thanks to two separate land acquisitions. At the north of this section, planning permission was granted in late 2020 for a new lifting bridge (Birtley Bridge 2). Construction is expected to start in 2022.

In 2021 volunteers installed a temporary fixed deck on the bridge constructed in 2019 (Birtley Bridge 1), creating a scenic 1km circular walk. In the longer term this is also planned to become a lifting bridge.
The trust has submitted two more planning applications to extend the restored section south of Birtley Bridge 1, which is partly in water and partly infilled. The plans include a restored lock and a brick-faced bridleway overbridge.

Summit (Cranleigh/Alfold/Dunsfold):
North of the busy B2130 road at Elmbridge, near Cranleigh, which currently blocks the canal route, the trust has submitted a planning application to restore the Rye Farm canal section and create a new towpath. The trust has also submitted an application for work that will create a navigable route under the B2130 and allow widening of the single-lane road. In 2021 work continued on the trust’s major ongoing construction project at Tickner’s Heath at Alfold, near Cranleigh. This project will allow the canal to cross the busy Alfold/Dunsfold road. Today a causeway blocks the canal route and it is not feasible to restore the canal crossing at this point. Instead, the trust is creating a new canal route with new road and pedestrian bridges.

In 2021 volunteers and contractors completed the piling for both bridges and installed the footbridge. Teams also created Surrey’s newest length of canal when they excavated the canal route beneath the footbridge. Work on a road diversion has now begun, ahead of construction of the road-bridge itself.  The trust has submitted a planning application for a second phase of the Tickner’s Heath project, which will link the diverted canal to the existing waterway via a bridge under an access track.

Loxwood/Ifold area:
In late 2021, volunteers began restoration work on the canal section south of Gennets Bridge Lock, which was rebuilt by the trust and completed in 2018. The recent work has included repairing a damaged culvert and removing the temporary causeway south of the lock, along with towpath improvements.

Repairs were also carried out to Drungewick Lock last year, at the south of the Loxwood operational section, and volunteers rectified leaks to the canal bank in the section between Drungewick Lock and Drungewick Lane Bridge. Their work means trip-boats should return to this section from spring 2022.

Arun Valley (Billingshurst/Pulborough area):
Just north of the A272 at Newbridge, the trust purchased 830m of canal, which is normally in water, at Northlands. South of Lee Place (Harsfold), where the trust completed a new canal bridge in 2020, volunteers carried out major repairs to the towpath and canal banks and constructed a new weir to mitigate the effects of flooding in the area.

Close to the junction of the canal route and the River Arun, trust teams completed repairs to Pallingham Bridge, which had suffered from severe cracking. Volunteers discovered the foundation of the towpath under the bridge and rebuilt it to its original state using some of the original stones.