Narrow canal, broad canal and river come together to form what could be Britain’s most under-rated cruising waterway.

It starts with a narrow canal, the intensely secluded line from the Grand Union at Norton (near Braunston) to Foxton. Author Tom Rolt, who did more to promote the revival of the canals than anyone, waxed lyrical about this quiet reach in his defining book Narrow Boat. There are more boats today than there were 70 years ago: new marinas around Norton have seen to that. But the countryside is the same, the canal keeping a careful distance from villages as it winds its level course through the rolling landscape of Northamptonshire and Leicestershire.

The only locks here are those at either end, at Watford and Foxton. Built narrow to save money, this proved a false economy, the one obstacle to a wide-beam through-route from north to south. A short-lived mechanical bypass at Foxton, an ’nclined plane’, which last worked at the beginning of the 20th century. Foxton Locks themselves soldier on, a canal landmark with two staircases of five locks each, and a real tourist magnet.

The locks become wider and more frequent as the canal descends to Leicester, yet the rural character remains. The sudden arrival of Leicester comes as quite a shock – but an enjoyable one. This is a lively, confident city with much to discover: the most authentic market you’ll find in Britain, narrow shopping arcades, and a surprising amount of history from Roman times onwards, including, of course, the King Richard III Visitor Centre. Secure mooring is available at the head of the Mile Straight, which forms the Grand Union’s assertive entrance to Leicester.

From here on it’s a river navigation, though with the occasional short canal cut. The Soar is innocuous enough at first, slowly disentangling itself from the suburbs. By the time you reach the villages of Mountsorrel and Barrow, it has taken on a green, unhurried air interspersed now and then by deep locks and friendly pubs. After Loughborough, it becomes better still: water meadows roll away to the sides, spires are sighted both distantly and (at Normanton) right by the river, and you might believe you’re only here on sufferance of the wildfowl.

Leicester Section of the GU Canal forms part of the Leicester Ring, the Cruising Guide for which is in Waterways World November 2020 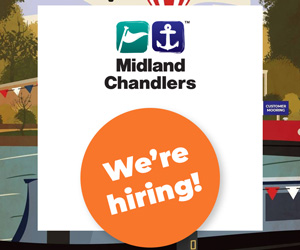