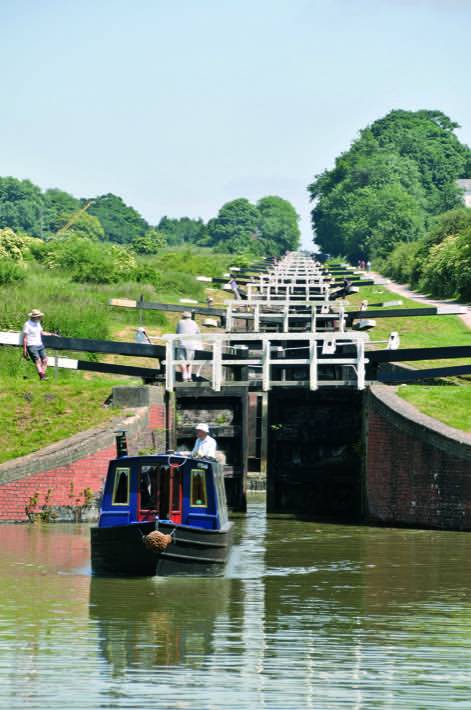 It’s impossible to overstate the appeal of this wonderful coast-to-coast waterway. Reopened throughout in 1990, the K&A passes through some of the finest scenery – and elegant market towns – that central southern England has to offer.

Bustling Reading – at the River Kennet’s confluence with the Thames – gives little indication of the delights to come further west. Soon, however, the K&A establishes itself as a rural waterway par excellence. Part canal, part river, it traverses a low-lying landscape of water meadows and marshland. Features of interest come along thick and fast, including Aldermaston Wharf with its visitor centre. Plentiful locks and a host of swing-bridges serve to exercise the crew.

But however much you may have enjoyed the journey thus far, the best of the K&A is just beginning as you cross the county border into Wiltshire. Little and Great Bedwyn are delightful canalside villages set amid the gentle hills of east Wiltshire. Then comes Crofton Pumping Station, open to the public daily in season – steam weekends are held from time to time. Perhaps the finest section of all lies between Pewsey and Devizes, as the canal traces a delightful course through the Vale of Pewsey, overlooked by the chalky Marlborough Downs. And the Long Pound – all 15 miles of it – gives the boater the chance to relax and enjoy it to the full.

The famous Devizes lock flight lowers the canal 237ft into the Avon Valley – a fabulous feat of engineering set in fabulous countryside. Bradford-on-Avon is followed by two fine aqueducts: Avoncliff and Dundas. And so to Bath – quite simply the most beautiful city in the UK. Any visitor to this Georgian treasure trove is lucky – those who arrive by canal boat are luckiest of all. Enjoy the Roman Baths, the Abbey, Pulteney Bridge, Georgian crescents, tea shops and fine restaurants – you’ll find it hard to drag yourself away!

Thereafter, several miles of pleasurable cruising on the River Avon are on the agenda before your arrival in the ancient seaport of Bristol. There’s much to enjoy here too (some even put the attractions on a par with those of Bath), including the mighty SS Great Britain, located in the Floating Harbour. Don’t miss the Clifton Suspension Bridge either, together with its informative visitor centre.