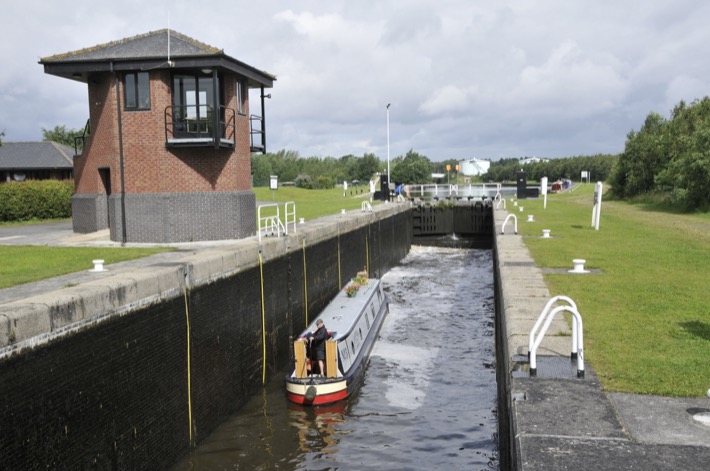 This ancient navigation begins with a fascinating set of locks from the tidal River Ouse into the now greatly under-used docks. Of most interest to the leisure boater will be the Waterways Museum & Adventure Centre, close to Goole Boathouse where pleasure boats cluster, away from the more commercial area of the docks.

The canal is then wide and deep, but can also be a bit bleak as it traverses the flat open landscape. There is, however, the anticipation of meeting commercial vessels, and also the junction with the New Junction Canal and two locks to add interest before Knottingley is reached. Here the delightfully different Selby Canal branches off, which for half its length back to the River Ouse follows the tortuous meanders of the River Aire.

Knottingley is interestingly industrial, and the navigation suddenly and surprisingly narrows as it cuts through the town. Then come the cooling towers of Ferrybridge to where, sadly, coal is no longer delivered by water. Now following the river, the navigation is wide as it wends its way through various Ings, ’water-filled wildlife reserves’, to Castleford. Here the Wakefield Section takes you across the impressive Stanley Ferry Aqueduct to the eponymous town with its restored historic warehouses where you join the Calder & Hebble Navigation.

The main A&C continues past more flooded areas, one the infamous St Aidan’s opencast pit, into which the canal disgorged itself with disastrous results in 1988. One of the consequences was the new Lemonroyd Lock which replaced two previous locks. Most of the locks show evidence of enlargement, but this is a completely new build. Soon a spate of factories announce the approach to Leeds, but the much older industry of Thwaite Mills Industrial Museum is well worth a visit before you reach the city itself.

The Leeds waterfront has changed dramatically in recent years, mostly for the better. The Royal Armouries Museum and other modern developments bring life to the waterside as it approaches its end-on junction with the Leeds & Liverpool Canal.

Cruising Guide to Aire & Calder is in Waterways World February 2020