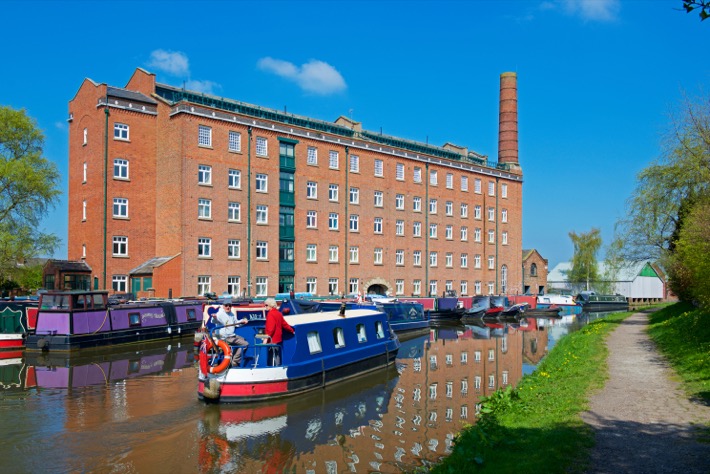 Part of the popular Cheshire Ring cruising circuit, the Macclesfield is a truly spectacular canal, slicing its way decisively through rugged east Cheshire countryside. Scenically it is up there with the best of them, not least in the vicinity of Bosley Locks, one of the finest flights on the system.

You enter the ’Macc’ from the Trent & Mersey Canal at Kidsgrove via the T&M’s Hall Green Branch, which crosses the main line on the sturdy Pool Lock Aqueduct. Once through the shallow lock at Hall Green you’re on the Macclesfield Canal proper. There are fine views of Mow Cop to the south-west, while Little Moreton Hall – one of the nation’s great half-timbered houses – lies within a short walk of Bridge 85.

The highlights keep on coming on this marvellous canal: Congleton, Macclesfield and Bollington are all worthy of exploration, while the fine Pennine scenery reminds you that you’re leaving the Midlands behind and heading for the north. The distinctive stone bridges are entirely in keeping with the surrounding countryside; especially pleasing are the roving bridges which allow the towpath to change sides.

Beyond Higher Poynton and High Lane, although fine views of both moorland and Cheshire Plain still present themselves, suburbia begins to intrude into the canal environment. Before long you arrive at Marple (an upmarket suburb of Stockport) and its immensely photogenic junction with the Peak Forest Canal.

The Macclesfield Canal forms part of the Cheshire Ring, the Cruising Guide for which is in Waterways World June 2022