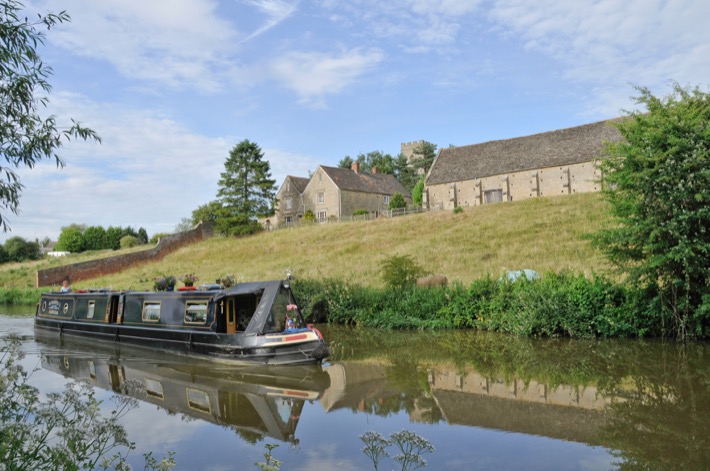 This is a canal of two halves. One, the ’North Oxford’ is merely pleasant. It runs from Braunston in Northamptonshire, where it meets the Grand Union, to Rugby and Coventry. Once the main route from the Warwickshire collieries to London, it was greatly straightened and improved in the 1840s, with elegant cast iron bridges to cut off the loops of the original meandering line.

But south of Braunston, the coal traffic died away. This was the last refuge of the ’Number One’, the owner-boatman. So there was no great imperative to straighten the canal – and it remains a winding, rural waterway with names like Clattercote Wharf and Pigeon Lock. The famous example is Wormleighton Hill, which you will ’orbit’ for over two hours as the canal gently makes its way around the lower slopes. Only the M40, and the busy town of Banbury, interrupt the rural idyll.

The village of Cropredy is the star of the South Oxford. It is colonised every August by good-natured folk fans for Fairport Convention’s annual reunion (a fair few arriving by boat), which seems entirely fitting for this village of honey-coloured stone pubs. But walk a bit further from the towpath and you’ll find a host of equally appealing villages: Claydon, Fenny Compton, King’s Sutton and the like.

The canal-builders ran out of money after Banbury, and had to do the last section into Oxford on the cheap: wooden lift-bridges replace brick structures, and the canal even shares its course with the River Cherwell for a while. The approach into Oxford skirts the trendy Bohemian area of Jericho: it’s a great place to moor while you explore the bookshops, colleges and markets of this rambling university city.