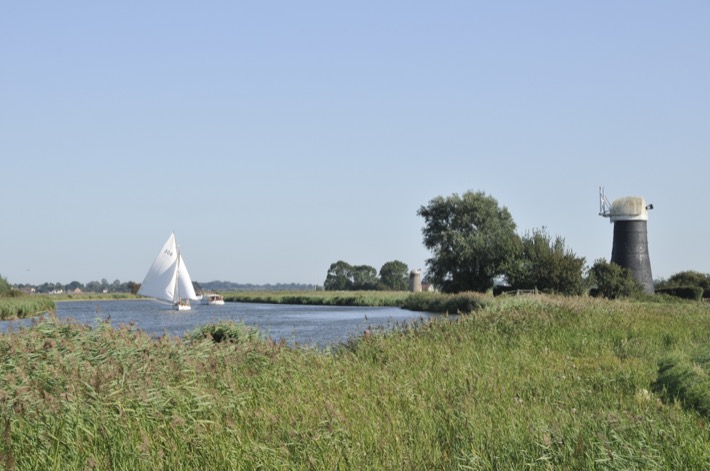 The Broads is the accepted term for the self-contained navigational area based on five rivers: the Ant, Bure, Thurne, Waveney and Yare, plus various branches and the Broads themselves. These are a series of shallow lakes which have resulted from peat extraction in the 13th and 14th centuries. Pleasure boating on the Broads began in the last century and this has always been an extremely popular cruising area, attracting, it has to be said, a different type of clientele from that of the main waterway network, including many first-time boaters. The Broads should not be despised or avoided on that account, however, for there are many remote corners to be discovered, as well as prolific wildlife and fascinating local architecture. The importance of the Broads was officially recognised in 1988 when the area was designated as the marine equivalent of a national park.

In essence, the northern rivers (Ant, Bure and Thurne) are by far the busiest, and indeed Wroxham, Horning and Potter Heigham can resemble Skegness and Rhyl in the height of summer. But even on the northern section there are plenty of places to escape the crowds, and to cruise (or, even better, sail) gently across Hickling Broad on a warm summer’s evening beneath a vast Norfolk sky is a memorable experience. Horsey Mere and Martham Broad are similarly remote outposts, and from the latter it is an enjoyable walk to the beach at Winterton.

To cross from the Northern Broads to the Southern requires passage across Breydon Water, which is an invigorating voyage but one requiring care and attention to avoid stranding at low water. It could be said, at least from a canal enthusiast’s point of view, that the southern rivers are the most rewarding, the Waveney and the Yare being perhaps prettier than their northern counterparts; they also offer the opportunity to visit Norwich, Beccles and Lowestoft, the latter by way of passage across Oulton Broad. The former is one of the finest small cities in the land, while Beccles is an unspoilt riverside town teeming with quaint shops and intriguing nooks and crannies. Provided your craft can pass under Beccles Bridge, then don’t miss the last few navigable miles of the Waveney up to Geldeston, a sleepily picturesque village which perfectly epitomises the lesser-known side of the Broads.

Many narrowboaters have preconceived ideas of Broadland boating, and wouldn’t touch the area with the proverbial barge pole. They don’t know what they’re missing!