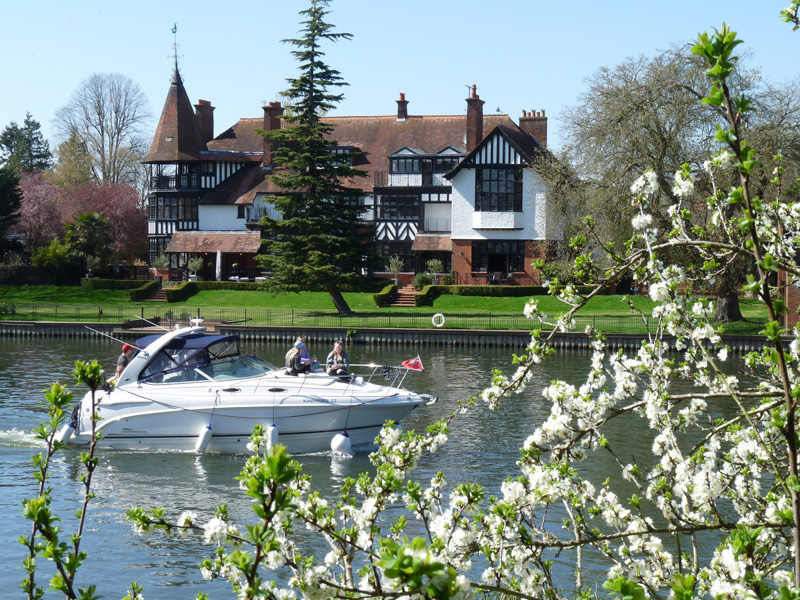 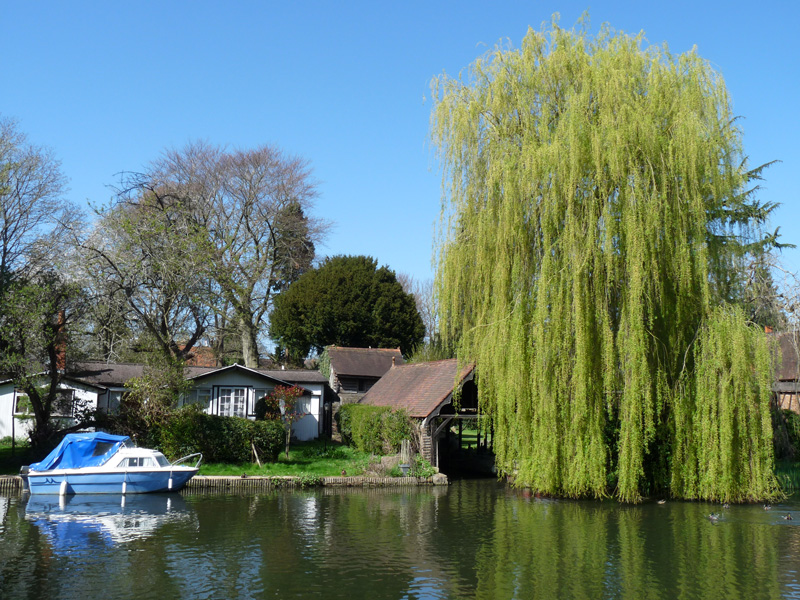 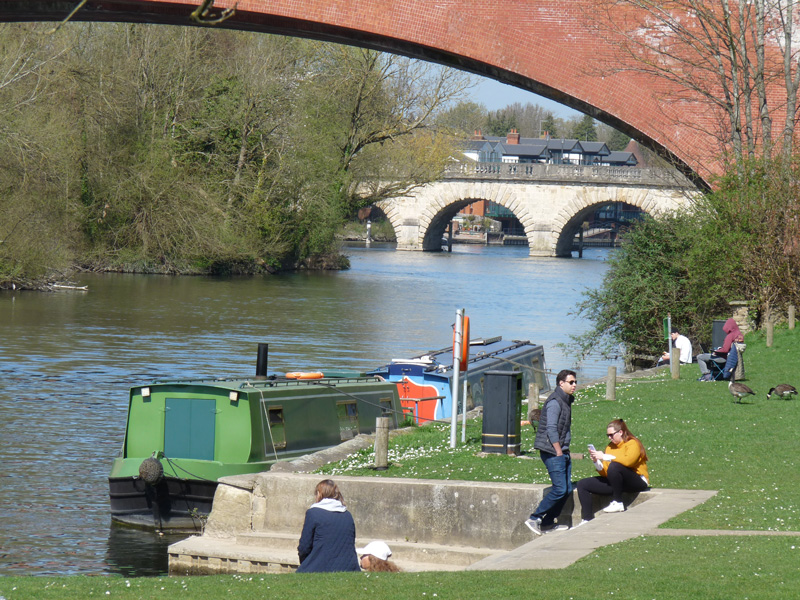 In the image slider above, three photographs from the The Thames Path at Taplow, Buckinghamshire, taken on Easter Sunday 2021 by John Lovelock. 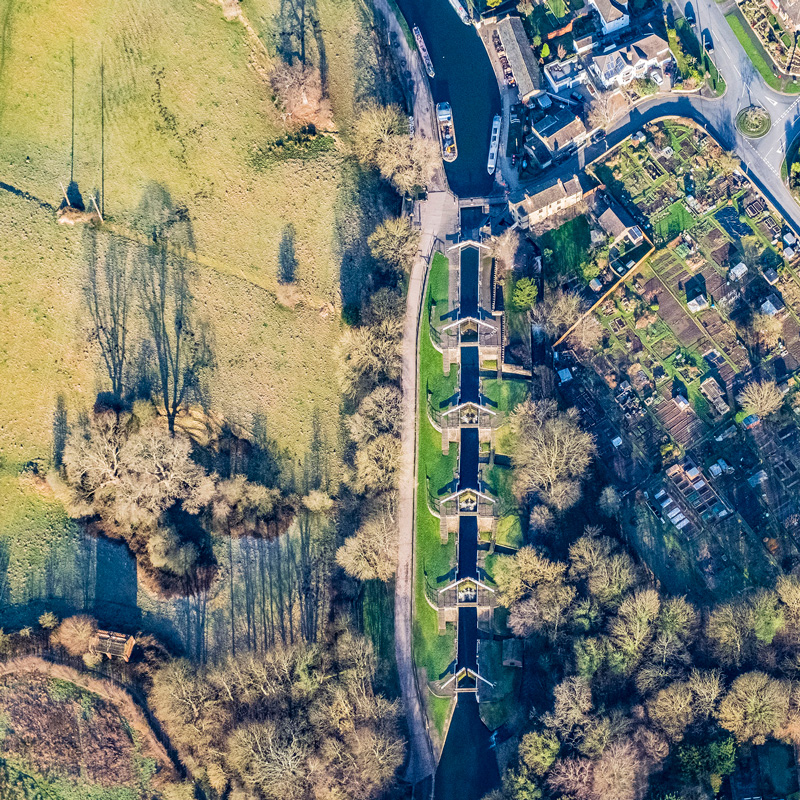 A new perspective of Bingley Five Rise on the Leeds & Liverpool Canal by Anthony Raithby.  See more of Anthony’s pictures at arfotolog.smugmug.com. 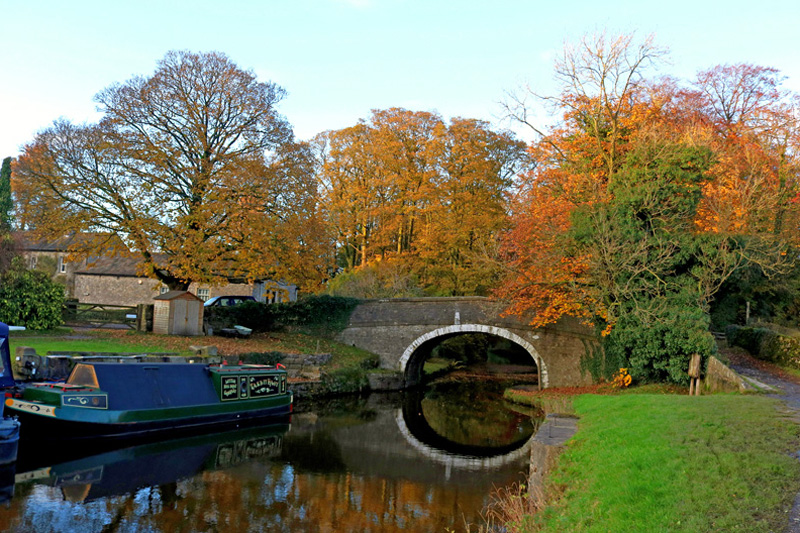 Autumnal colours around the canal bridge at East Marton, near Gargrave, by Paul Biggs. 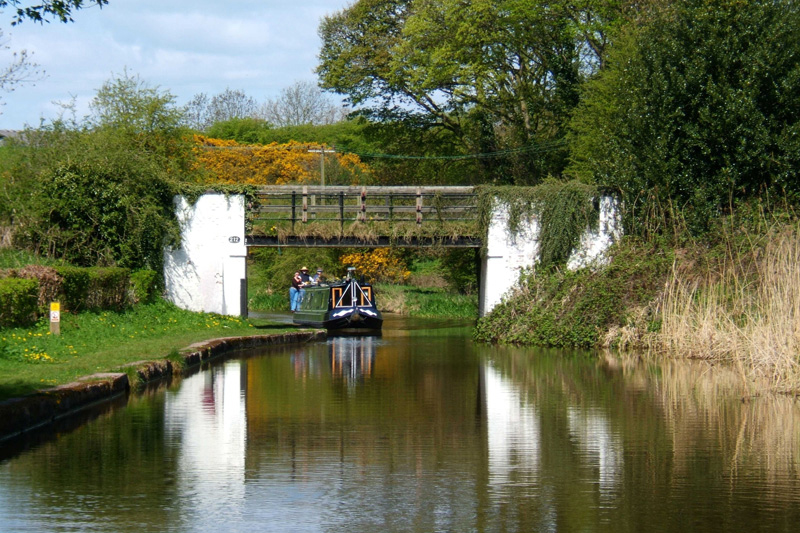 Bridge 212 on the Trent & Mersey Canal by Cyril Wood. 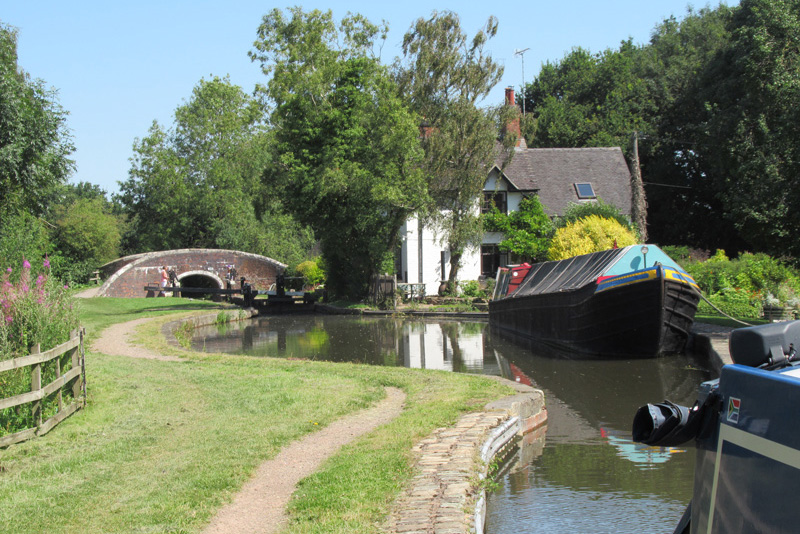 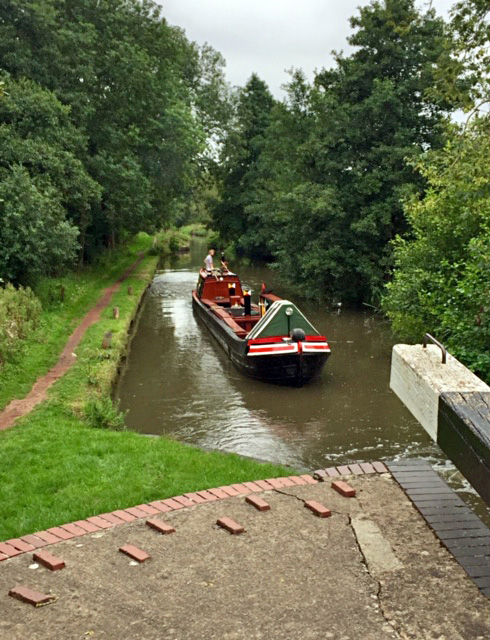 A working narrowboat on the southern Stratford Canal near Lowsonford by Peter Baldwin. 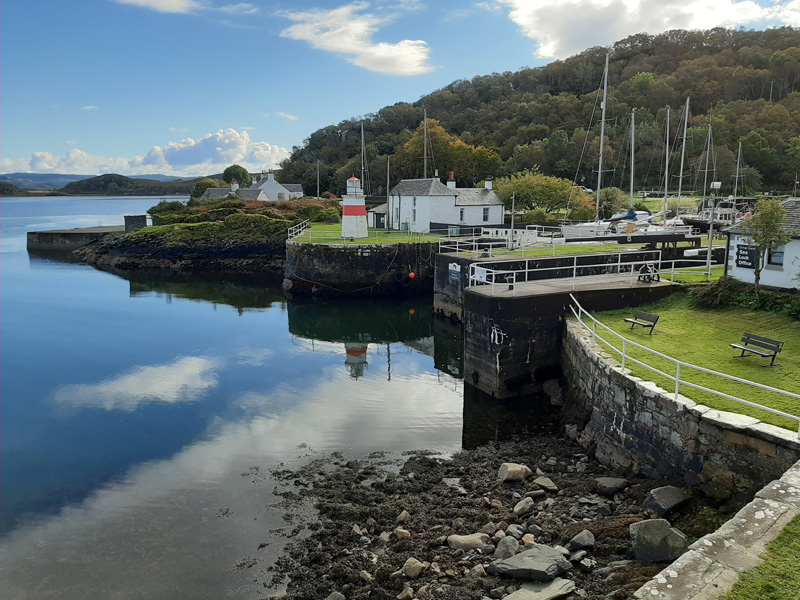 The western entrance of Scotland’s Crinan Canal, where the waterway’s basin and lock spill out into the Sound of Jura, by Richard Franklin. “I spent a day walking the canal in October and struck lucky with weather – and local lockdown rules!” says Richard. 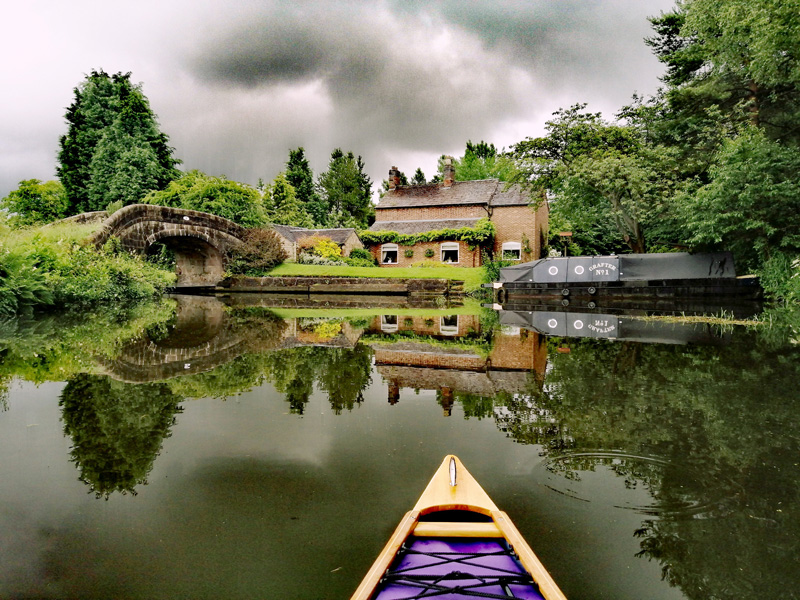 “I canoed the lovely lock-free Leek Branch of the Caldon Canal in July. This is Hazlehurst Turnover Bridge 3, next to which is the former Denford lock-keeper cottage, now a private residence.” 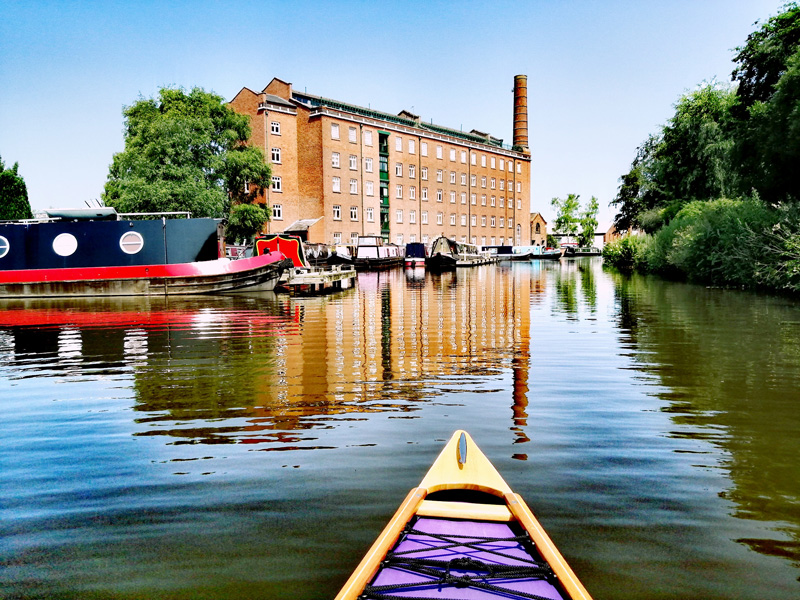 “This is the Publicity Works, Union Flour Mill or, as its better known, the Hovis Mill, which I discovered in June when I paddled the Macclesfield Canal. The mill had its own branch from the canal that went through the centre of the building under a lovely stone arch.”

Canoeist Dermo RoSheen (instagram.com/livingthedreamcanoes) sent in these pictures snapped while exploring the canals. “I would love to paddle the whole of the UK’s inland waterways network – hopefully over time I will get to see as much of it as I can. I keep toying with the idea of buying a cruiser, or even better a narrowboat, but at the moment the versatility of my canoes is too good to pass up.” 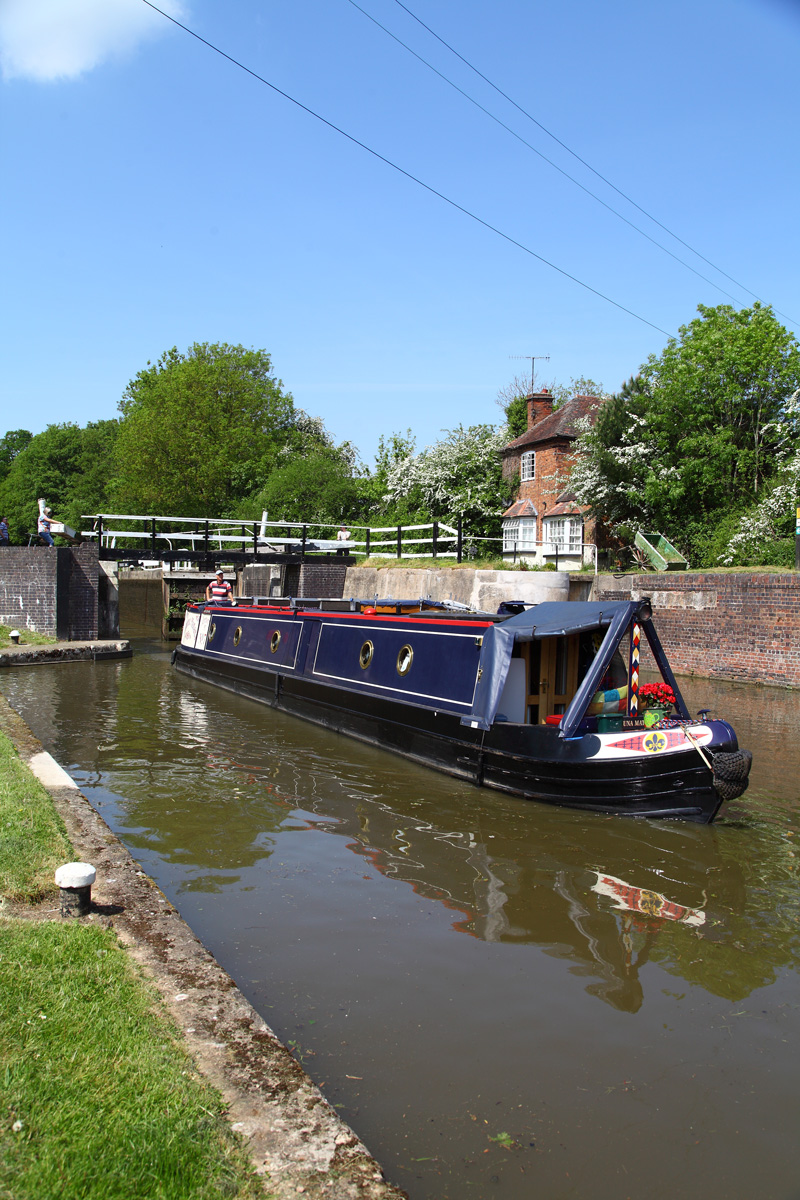 A sunny spring day on the Grand Union Canal’s Hatton Flight near Warwick, by Simon Hopkins. 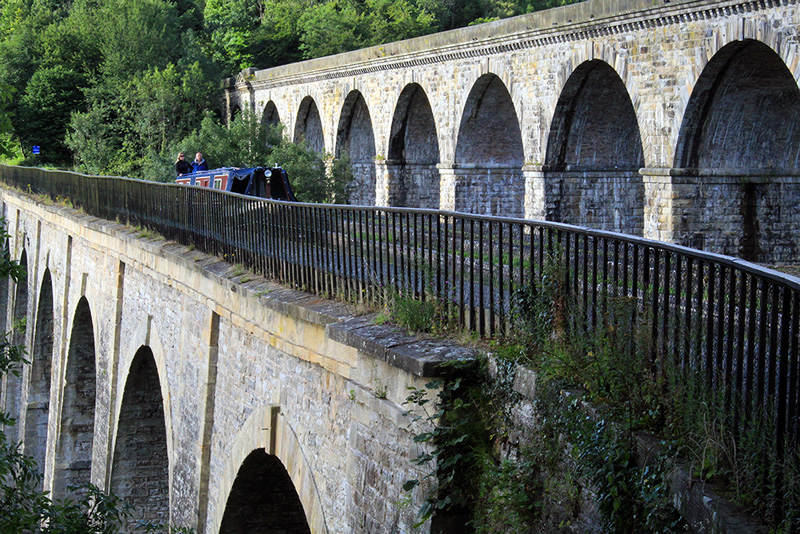 A narrowboat crossing the impressive Chirk Aqueduct on the Llangollen by Andrew Hayward. 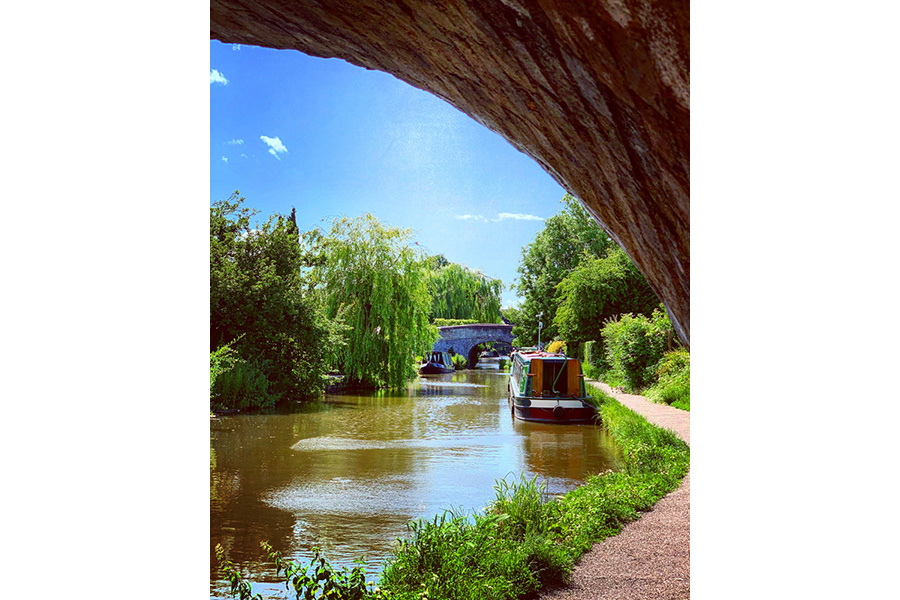 Looking out from underneath Bridge 29 on the Shropshire Union Canal. 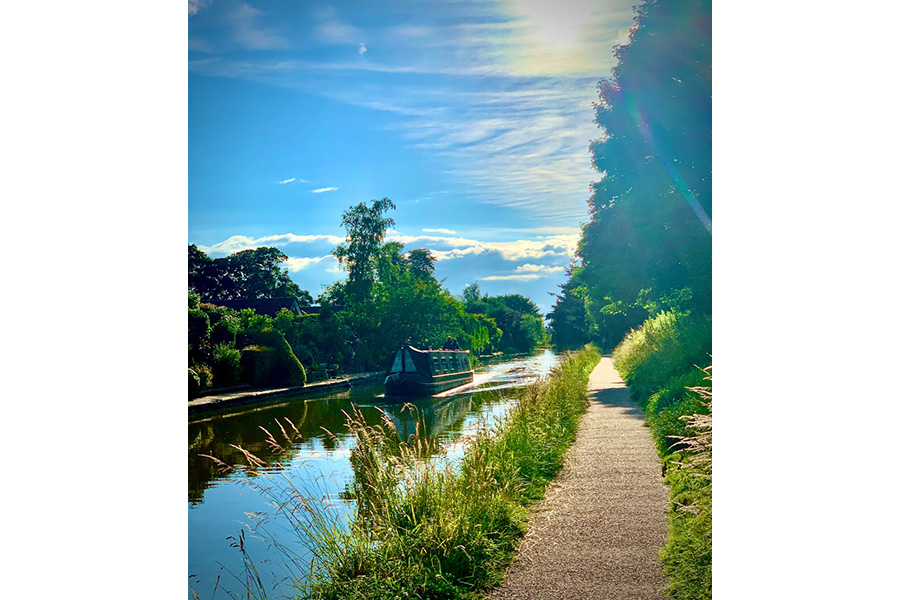 Cheshire-based photographer Rebecca Page (instagram.com/rpagephotography) lives close to the Shropshire Union and Trent & Mersey canals and sent in these pictures that she took on walks with her dog in early July. “It’s so nice to see boats travelling on the canals again – normality is coming back.” 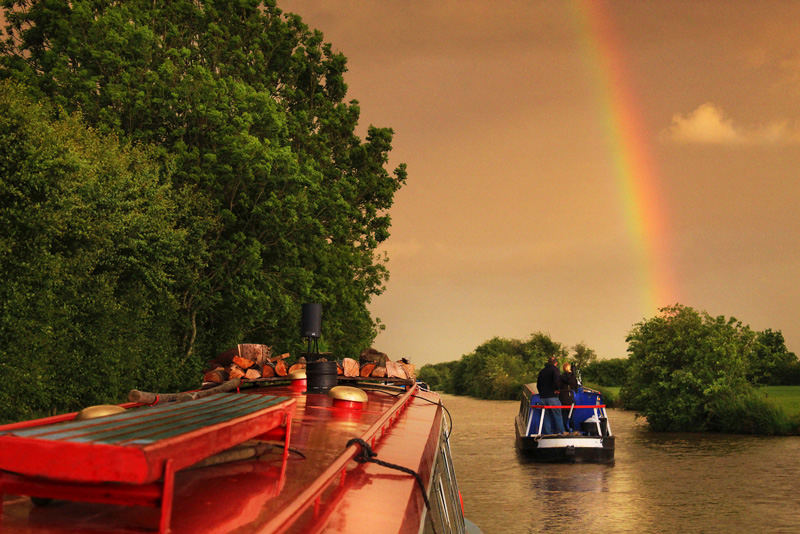 Andrew Hayward snapped this beautiful rainbow over the Shropshire Union Canal at Hack Green, just south of Bridge 85, in June. 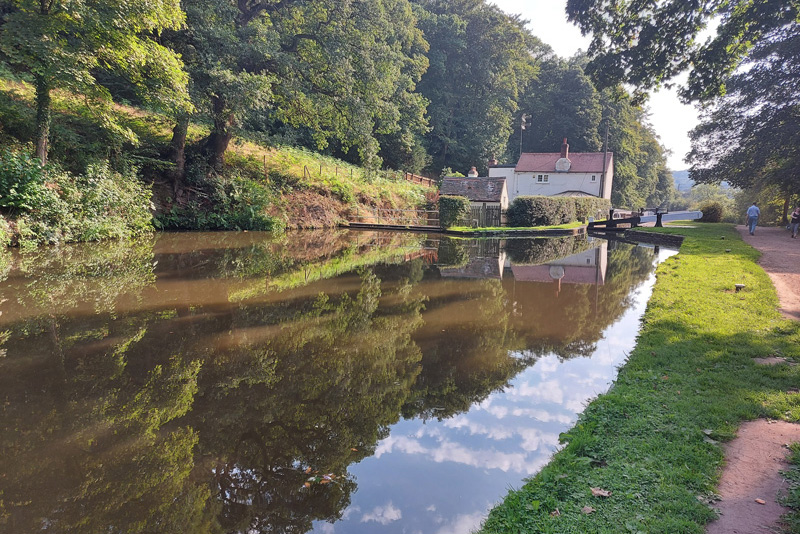 “Hyde Lock at Kinver is a beautiful, tranquil place where I enjoy spending time, going for walks and taking photographs,” Sally Shillingford. 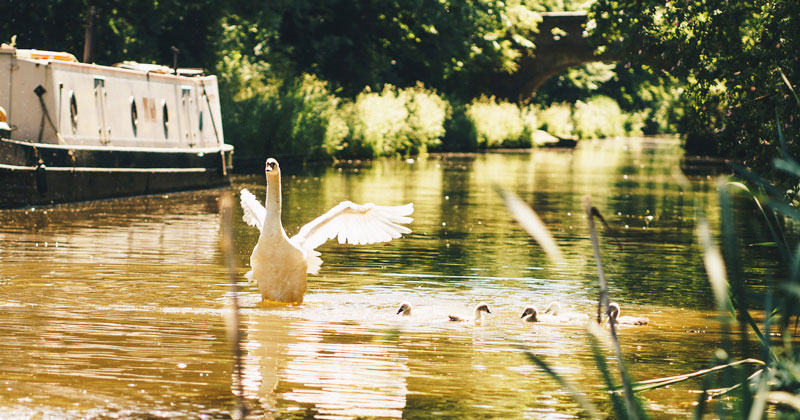 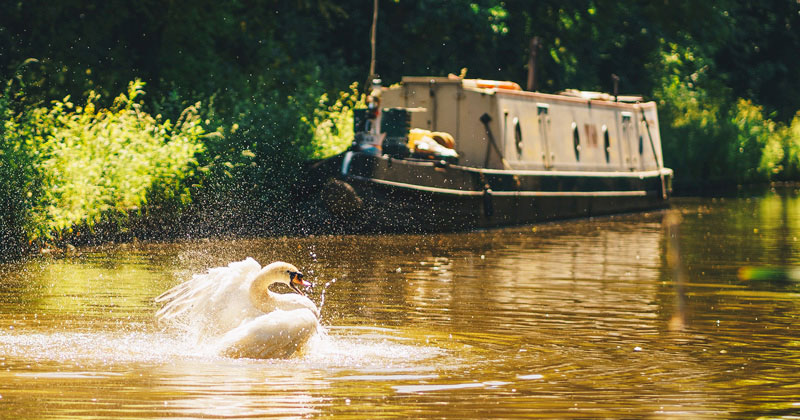 The Worcester & Birmingham Canal at Hanbury Wharf by Alex Vanden Bosch (instagram.com/vanboosh/). “I managed to capture these swans playing in the canal while I was sitting in the bow of my boat removing some rust – a welcome distraction from the rather boring task!” 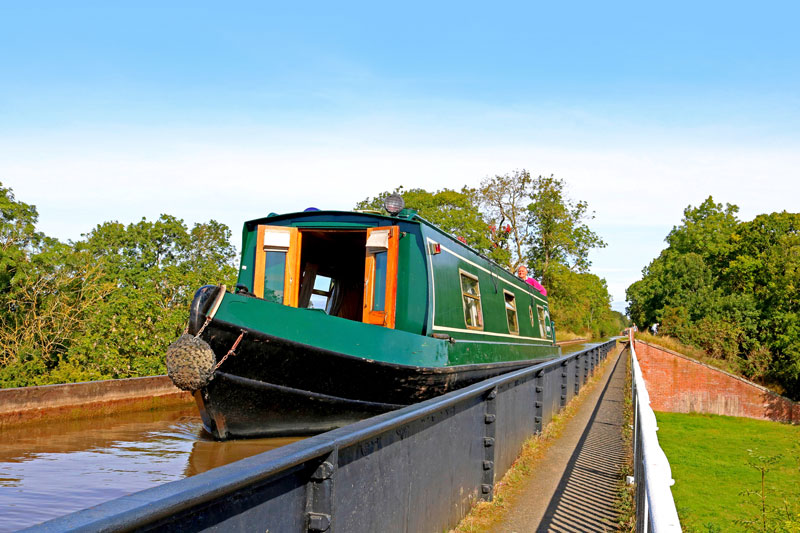 Crossing Edstone Aqueduct on the Stratford Canal, by Paul Biggs. Unusually, the water level is higher than the towpath on this and two more of the Stratford’s aqueducts, and for walkers it can be unnerving to see boats drifting by at head height. 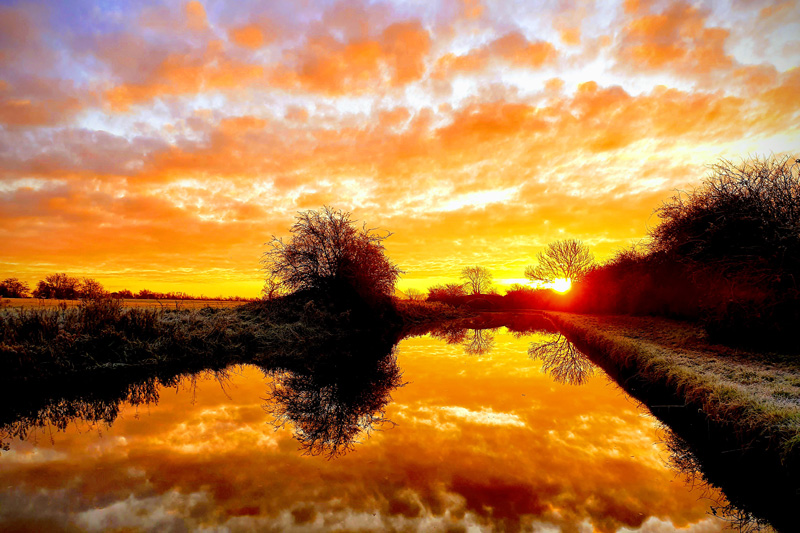 The Shropshire Union Canal, near Eddisbury Way and Beeston Castle. 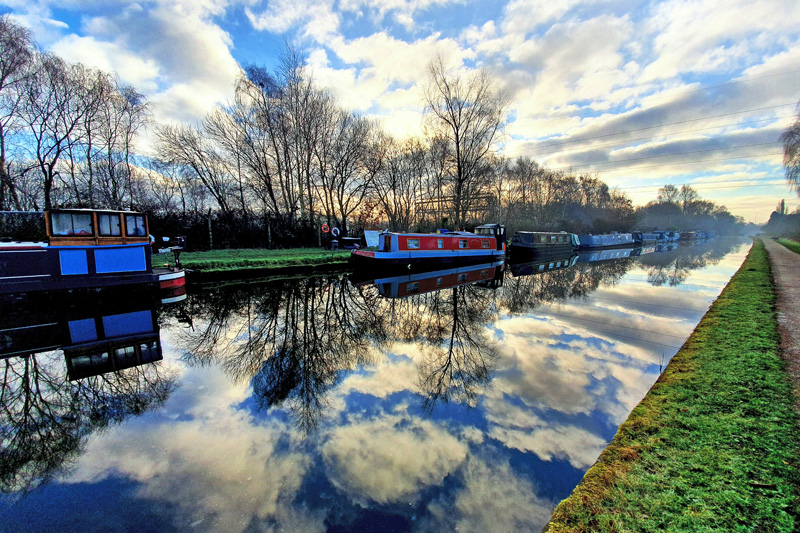 The Bridgewater Canal at Stretford, near Deanwater Court. 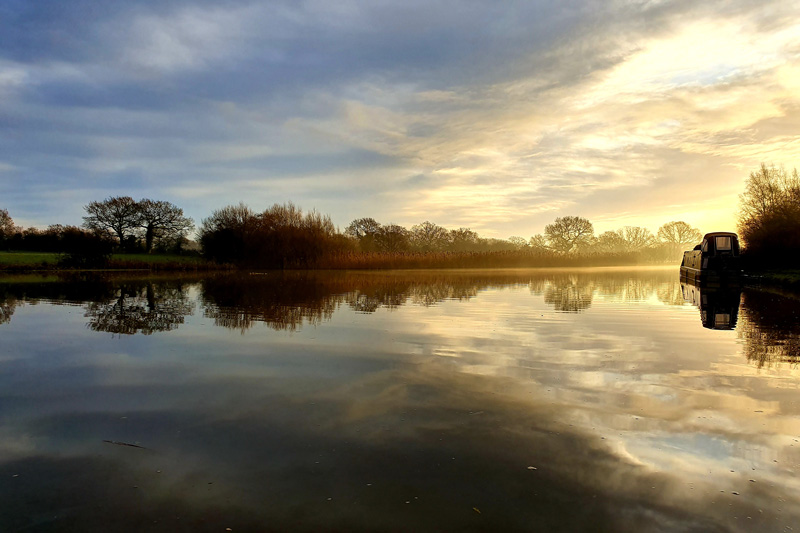 The Trent & Mersey Canal, near Whatcroft after Bridge 180a.

Three striking photographs by Chris West. “I’m a liveaboard boater and enjoy travelling the winding waterways of England in all weathers. Observing, and experiencing, the ever-changing seasons is one of the immeasurable pleasures of living on the water.”

The River Avon at Evesham 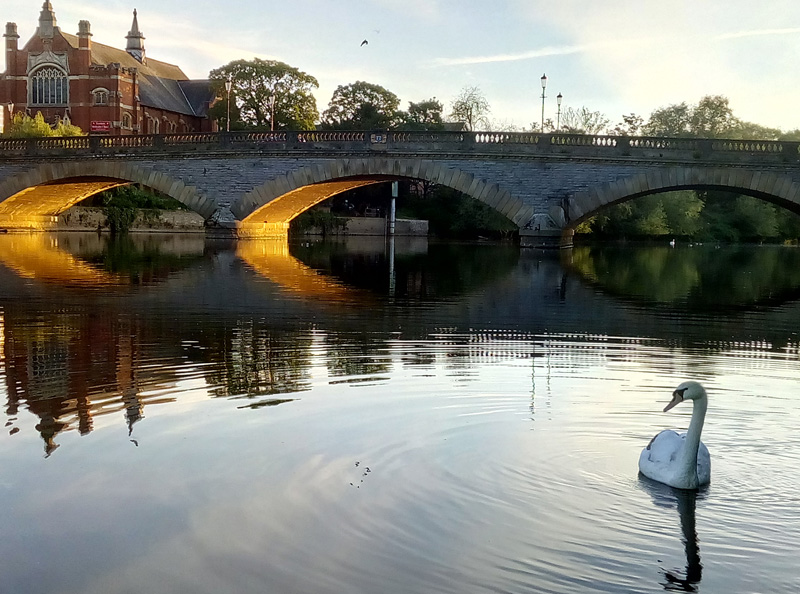 The River Avon at Evesham, by David Jackson. “I was woken at 5.30am on a summer’s morning by this swan nibbling the weed on the boat to see the early sun lighting the underside of the arches of Workman Bridge.” 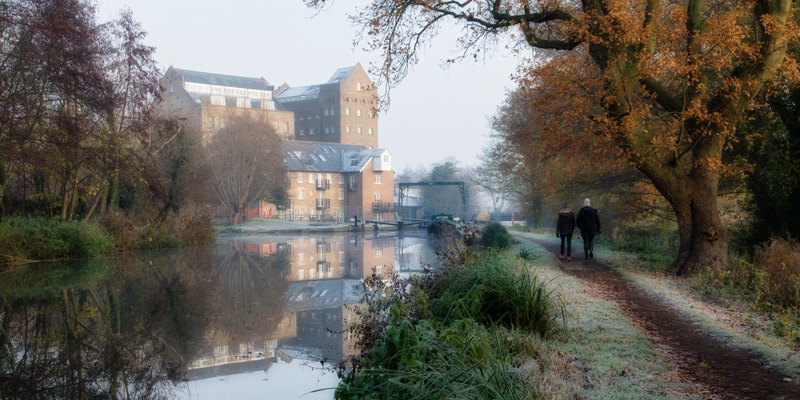 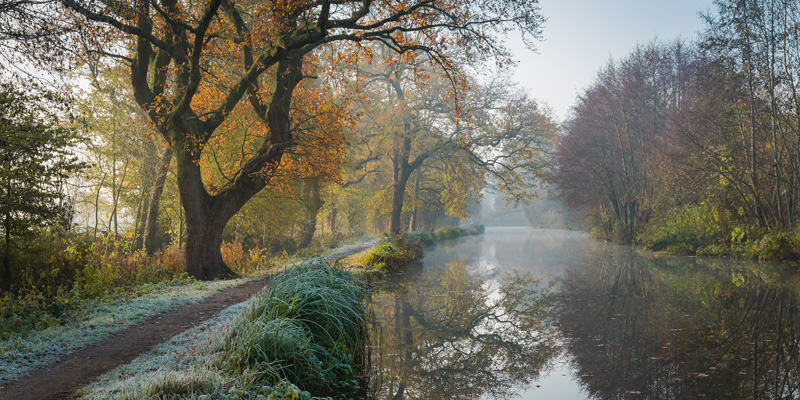 'Looking Both Weys’, by Stephen Darlington. “The two images were taken on the Wey Navigation near Coxes Lock and Mill, the first looking north and the second south, on a cold and slightly misty morning in November.”