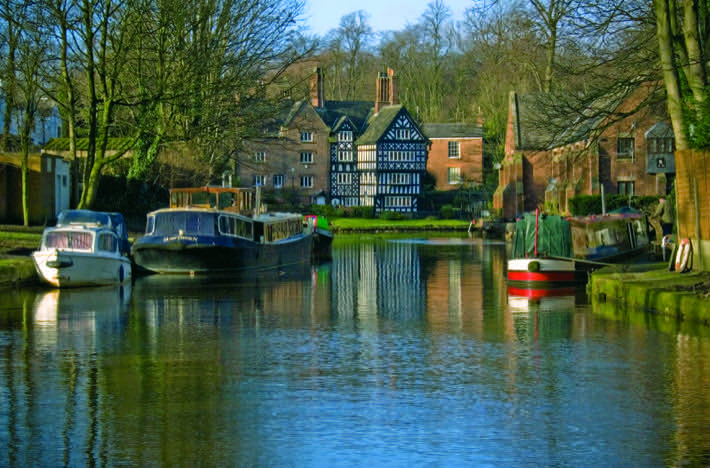 Often claimed to be the ’first’ canal in England, this accolade rightfully goes to the St Helen’s Canal – but the Bridgewater was a seriously important navigation and became a link in the vast network of waterways that developed at the end of the 18th century. Perhaps the most remarkable feature of the canal, given the ’narrow’ nature of many that followed it, is its size. James Brindley built a wide canal, capable of carrying respectably sized vessels, as were subsequent canals that linked to it from the north – but not from the south.

The original route was from the Duke of Bridgewater’s underground mines at Worsley, across the stone arches of Barton Aqueduct over the Mersey & Irwell Navigation, and into Manchester. What we think of today as the main line was the extension to Runcorn.

Being part of the Cheshire Ring, it is often considered a through-route rather than a destination in itself, but it has its highlights. Top of the list must be Barton Swing Aqueduct, built in the late 1890s to carry what we now know as the canal’s Leigh Branch across the Manchester Ship Canal. This wonder of Victorian engineering still operates daily.

Further along the Leigh Branch is historic Worsley, origin of the canal and the entrance to the former underground mines at the Delph. Beyond here the canal continues to its end-on junction with the Leeds & Liverpool Canal’s Leigh Branch.

Castlefield in Manchester, where the Bridgewater joins the Rochdale Canal, is now a thriving historic area including the Manchester Museum of Science & Industry and the site of a Roman fort. From here, past Waters Meeting where the Leigh Branch joins, and through the Manchester suburbs, is unexciting urban landscape accompanied by the Metrolink tramline, but things improve at and around the delightful Cheshire village of Lymm.

Until recently Preston Brook was a highlight, with its vast warehousing complex, but sadly, following the encroachment of Runcorn New Town, this is now just another huge anonymous housing development. Most boaters will turn south here to almost unknowingly join the Trent & Mersey Canal at Preston Brook Tunnel, but they will miss one last highlight which lies on the lesser-travelled arm into Runcorn: the old buildings and grounds of Norton Priory are well worth a diversion to visit, even if you do not venture all the way into Runcorn. Here two massive flights of locks once linked with the River Mersey; today it is hard to find any trace of them.

The Bridgewater Canal forms part of the Cheshire Ring, the Cruising Guide for which is in Waterways World October 2020

Friends of the Bridgewater Canal (Sale)